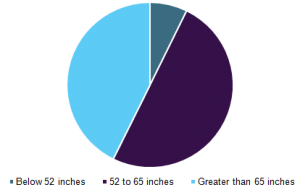 Grand View said that the 52-65 inch TV screen segment dominated the global 4K TV market in 2016, since this segment has a wide range of product offerings at different price points.

However, it tipped TVs with screen sizes above 62 inches to witness the highest growth over the forecast period, owing to the “declining price trend of 4K TVs coupled with increasing disposable incomes of individuals globally”.

Asia Pacific held the largest share of the 4K TV market in 2016, with China the biggest consumer of these sets. However, North America also witnessed “significant growth” – a trend that Grand View expects to continue over the forecast period.

“The [North America] region is expected to witness tremendous growth also owing a drop in prices of 4K TVs, and it is anticipated that by 2025 more than half the American population will own at least one 4K TV,” according to the report.

“The European 4K TV market also exhibited a moderate growth due to an increasing demand in the UK and Germany. The proliferation of TVs supporting HDR will be a key factor expected to drive the growth in developed markets.”