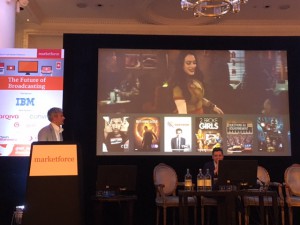 Jean-Marc Denoual at The Future of Broadcasting conference

France-based OTT TV service Molotov has passed the milestone of one million, according to Jean-Marc Denoual, the outfit’s chief operating officer and co-founder.

Molotov, which launched in France a year ago, is currently available free of charge. “Our strategy is to start the subscription model in the second half of this year,” said Denoual, speaking at Marketforce’s The Future of Broadcasting conference yesterday.

The company plans to start marketing pay TV actively when it reaches a certain number of subscriptions, said Denoual, who described Molotov is “a distributor”.

He said the strategy is to open up the platform up to all who want to be on it. The company is focusing on signing up movie packages and non-exclusive pay TV packages. It is talking to Canal+, but this is “complex”, said Denoual.

He said Molotov is not providing SVOD because it wants to focus on the TV experience, meaning a mix of live OTT TV, replay and premieres of upcoming shows.

Molotov launched last July on Apple devices, adding iPhone in September. The company launched in Android in December, and is also available on smart TVs.

Cloud DVR was launched in December after the company negotiated deals with content suppliers.

Denoual compared Molotov’s freemium model to gaming. “The strategy is like a gaming strategy. We want to attract the maximum number of people as fast and possible and then start subscriptions,” he said.

Denoual said that the idea was to create a new TV experience and distribution platform to help content providers win back a younger TV audience.

“We tried to rethink the way to present TV,” he said. “We provide a single experience aggregated with all channels with EPG in the cloud and some additional features.”

Denoual said that Molotov had the intention of reinforcing rather than undermining channels by pointing people to them on the basis of the content they want to watch.