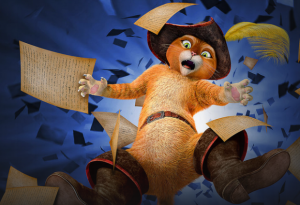 In effect, this will allow children to choose how the narratives of Puss in Book: Trapped in an Epic Tale and Buddy Thunderstruck: The Maybe Pile play out.

Netflix claims an “intertwining of our engineers in Silicon Valley and the creative minds in Hollywood has opened up this new world of storytelling possibilities”.

DreamWorks Animation is behind Puss in Book, while Buddy Thunderstruck comes from American Greeting Entertainment and Stoopid Buddy Studios.

“The children’s programming space was a natural place for us to start since kids are eager to ‘play’ with their favorite characters and already inclined to tap, touch and swipe at screens,” said Carla Engelbrecht Fisher, director of product innovation.

“They also talk to their screens, as though the characters can hear them. Now, that conversation can be two-way.

Meanwhile, Netflix has ordered a comedy-drama procedural based on an Israeli drama that played on Yes.

The odd couple drama follows a maverick, disgraced former NYPD officer who lives with his son, an obsessively honest cop who always plays by the rules.