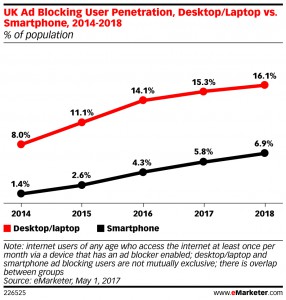 Some 20.9% of UK internet users, 11.4 million people in total, will use ad blocking software this year, according to eMarketer stats.

The research firm said that ad blocking is becoming more common among demographic groups, having once been seen “as the preserve of young, and often male, early adopters and gamers”.

By the end of 2018, eMarketer expects 22.2% of UK internet users (12.3 million people) to be using ad blocking software on at least one of their devices.

However, the projection marks a downgrade on eMarketer’s earlier estimates, which it attributed to a “slower uptake on mobile devices”.

“However, the threat hasn’t taken off quite as quickly as we’d originally thought. Some of the publisher responses to the problem have had positive effects, indicating that UK internet users may be persuaded to turn off their ad blocking software if the benefits of ad-supported content can be better communicated and the advertising better delivered.”

Ad blocking software is designed to prevent the advertising content of a webpage or application from being served and viewed.