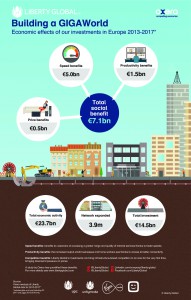 Liberty Global claims its €14.5 billion investment in super-fast networks over the past four years has generated total economic activity in the region of €23.5 billion and has provided a ‘net social benefit’ of €7.1 billion.

This is according to an analysis commissioned by the cable giant from Oxera Consulting, which was presented at ANGA COM in Cologne this week.

Oxera consultant Felipe Florez Duncan said that many of the services that would deliver growth in the future had yet to be developed. However, for the purposes of Oxera’s analysis, the company had focused on strictly measurable benefits of Liberty’s investment programme, which he said were “substantial”.

Florez said that it was difficult to “pin down a number” for the impact of this type of investment. “From an analytical point of view, it presents a challenge,” he said.

Rather than look at specific applications, Oxera looked at the investment made by Liberty between 2013-17 and assessed the measurable impact on its customers.

Florez said Liberty had invested €14.5 billion over the four years in total, connecting 3.9 million additional homes and businesses. The economic footprint of the investment, including the impact on suppliers and the multiplier effect, produced €23.7 billion in “wider economic activity”, he said.

The net effect and incremental benefits to consumers and businesses from accessing the network, ‘speed benefits’, amounted to €5 billion, said Florez. Greater speed and reliability allowed consumers to access a wider range of services and enabled multiple members of homes to access HD content simultaneously, he said, giving rise to economic benefits.

‘Price benefits’ for new areas where Liberty has entered the broadband market, created by greater competition, amount to €0.5 billion in total, said Florez.

‘Productivity benefits’, based on figures extrapolated from previous investments, amount to €1.5 billion, he said.

Overall, therefore, Liberty’s investment has created a “total social benefit” excluding an impact on its own profits, of €7.1 billion, said Florez.

The overall ‘social return’ on the investment is 49%, according to Oxera’s calculations.

Severina Pascu, CEO, UPC CEE, also speaking at the presentation, said that in her region broadband is “a significant growth engine”. Romania had some of the fastest internet offerings in the world, she said.

On top of upgrading the network, Liberty Global had sought to migrate its customers to higher speed services, she said. “There is a lot of appetite from customers to take our services.”

Also speaking at the presentation, Lutz Schuler, the CEO of Liberty’s German unit Unitymedia, said that Liberty had invested significantly in its network over the past four years.

Liberty’s chief corporate affairs officer Manuel Kohnstamm said that the Project Gigasphere network investment programme, which had grown out of the UK’s Project Lightning, represented a “big investment”. He said that the Oxera study had been commissioned to give this investment more visibility.