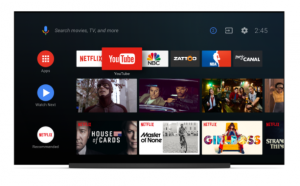 Google is to undertake a major revamp of its Android TV offering as part of its Android O upgrade. The new version of the platform will include a channel-like home screen, bringing content from multiple apps to the fore, and the use of Google Assistant to enable navigation.

The home screen organises video content into channels and programmes “in a way that’s familiar to TV viewers”, according to Android devices and media developers lead Paul Saxman.

In a blog post on the update, Saxman said that Android apps would be able to publish multiple channels, to be “represented as rows of programmes on the home screen”.

Relevant programmes for each channel can be added by individual apps , to be updated when new content is available or dynamically as users access content on the channels.

The display of programmes within the channel can included a video previous, which will be played automatically when users focus on specific programmes.

Users will also be able to choose which channels are displayed on the home screen, and the order in which they appear.

Other features on the home screen include a ‘quick launch bar’ for favourite apps and a ‘watch next’ channel that contains programmes based on users’ viewing habits.

App developers will not be obliged to make their content available via the watch next channel, and the extent to which they allow their content to be mixed with that from other apps will probably depend on Google’s success in achieving mass penetration of the platform.

Later this year, Google will also make voice recognition system Google Assistant available as part of Android TV, allowing users to search for content and control playback with voice, along with using their device to control smart home applications such as lighting. Google Assistant will be available on devices running the Android M and N variants as well as O.

Google is make the APIs necessary to create and maintain channels available via its TvProvider APIs, distributed as an Android Support Library module with Android O.

Nexus Players will receive the new TV upgrade later this year as an over-the-air update.