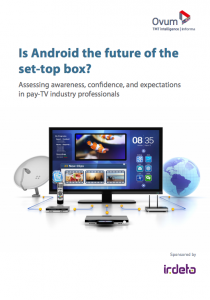 The majority of video service providers either have an Android TV or Android Open Source Project on their technology roadmaps, according to a new survey conducted by Ovum.

The research, which was commissioned by security specialist Irdeto, found that 72% of respondents are considering Android implementations as a part of their set-top box strategies.

Some 50% said they see Android being important for their goals within the next five years, with cited benefits including the availability of new features and services, faster time-to-market, an attractive user interface and cost efficiencies.

However, only 54% of the video service providers polled said they are willing to pay more for Android chipsets compared to traditional chipsets with embedded middleware.

“Education on Android platforms is critical for video service providers to understand the capabilities, benefits and drawbacks of each technology in order to make the best strategic decision concerning their technology roadmap,” said Ovum’s TV practice leader, Ed Barton.

Irdeto’s director of product management, Frank Poppelsdorf, said: “These results indicate that Android TV is not only on pace to play a critical role in the future of TV distribution, but are essential for the industry to meet growing consumer demand for new and innovative services.”

However, he claimed that the open nature of the Android technology “brings up several security concerns, especially in regard to piracy”.