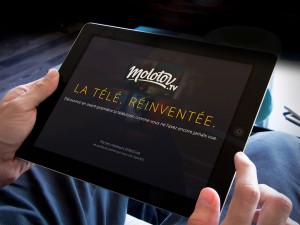 Molotov, the French streaming service founded by Canal+ founder Pierre Lescure and other Gallic TV veterans, plans to launch in new European territories, and ultimately, in the international market.

“There is no fixed agenda yet, but we’re in discussion with the main European channels, and a few of them have already signed up,” former TF1 exec Denoual said.

“The choice of the first country we’ll extend to will depend on the negotiations with the networks, the way the country fits with the Molotov project, and how much digital usage is developed there.”

The Molotov service offers 80 free DTT and pay TV channels, along with a guide to upcoming programmes.

In France, the next step will be to boost the channel line-up in Molotov’s pay TV segment. Besides adding new content, the user experience will be enhanced with the addition of new social functionality, helping users to connect with one another.

After the European expansion, the plan is to move into the global market. “Of course, from three years to now, we’d like to see our platform available into several countries and on another continent,” said Denoual.

The service went live across France in July with a freemium offering and two paid-for options. The services is currently available on smartphone, tablet, Apple TV, connected TVs and on PC or Mac.