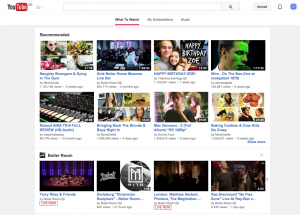 YouTube viewers are now watching a billion hours of content a day on the video service, according to company stats.

Announcing the milestone, YouTube said that around the world people are spending a billion hours each day “rewarding their curiosity, discovering great music, keeping up with the news, connecting with their favourite personalities, or catching up with the latest trend”.

To put the billion figure into perspective, YouTube said that to sit and watch a billion hours of YouTube would take “over 100,000 years”.

“A few years back, we made a big decision at YouTube. While everyone seemed focused on how many views a video got, we thought the amount of time someone spent watching a video was a better way to understand whether a viewer really enjoyed it. It wasn’t an easy call, but we thought it would help us make YouTube a more engaging place for creators and fans,” said YouTube VP of engineering, Cristos Goodfrow.

YouTube announced the one billion hours viewing figure in a blog post yesterday and said that it reached the landmark number during 2016.

In its most recent quarterly earnings announcement, YouTube’s parent company Alphabet said that every day more than 1,000 YouTube content creators reach the milestone of having 1,000 channel subscribers.

On the earnings call, Alphabet CEO Sundar Pichai also said that the company plans to invest more in subscription service YouTube Red, targeting “more countries, more original content”. The service launched in the US in 2015 and is now available in five countries.