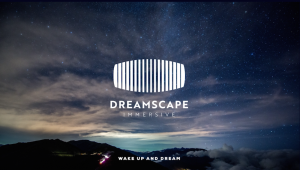 Location-based virtual reality venture, Dreamscape Immersive, is due to launch in September after closing a Series A funding round from major film studio backers.

Dreamscape said it aims to “untether” its audience from the computer and allow them to “walk freely with friends within a virtual world, where they see themselves, interact with objects and each other, and experience worlds previously accessible only in their imaginations.”

The former studio head at DreamWorks Pictures, Walter Parkes, and live entertainment producer and entrepreneur Kevin Wall are behind the company, which uses technology related to medical imaging and body mechanics developed by Swiss researchers Caecilia Charbonnier and Sylvain Chagué of the Artanim Foundation.

“Now, audiences will have the ability to purchase a ticket, step inside of the story and experience it personally in a way never before imagined.”

Parkes added: “We’ve assembled a team with years of proven success in the creation and distribution of global entertainment; our goal is to move VR into the mainstream.”