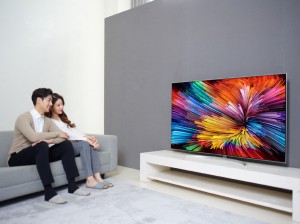 According to LG, the technology, which will be incorporated in the third generation of LG’s Super UHD TV line, renders “highly nuanced” and accurate colours while maintaining picture quality at wider viewing angles.

According to LG, Nano Cell LCD technology, which employs uniformly-sized particles approximately one nanometre in diameter, creates more accurate colours that can be viewed from wider angles than in possible with other LCD TVs.

The technology absorbs surplus light wavelengths, enabling the displays to filter distinct colours with much greater precision, rendering each colour as it was intended by the original content creator, according to the company.

LG has also said it will incorporate the Technicolor Expert Mode technology to its Super UHD screens.

LG and Technicolor announced their collaboration on HDR at CES last year, when the pair teamed up to screen HDR content created by Hollywood director Francis Ford Coppola.

In addition to UHD TV, the devices feature version 3.5 of LG’s webOS-based smart TV platform. This includes a new Magic Link feature to provide content recommendations and information about characters and actors on-screen, and Magic Zoom, which enables viewers to enlarge and record any part of the screen they wish to see close up. Phones and PCs can be connected to the TV via a USB cable to enable viewing of 360° virtual reality content.

“Our 2017 Super UHD TV line-up with LG’s proprietary Nano Cell technology is a breakthrough in display technology that advances the LCD TV viewing experience by combining an expanded colour gamut with the ability to more accurately create those colours, resulting in superior picture quality regardless of viewing angle,” said Tim Alessi, head of product marketing at LG Electronics USA. “Nano Cell is another example of how LG is innovating and pushing the boundaries of display technology to meet the evolving needs of our customers.”