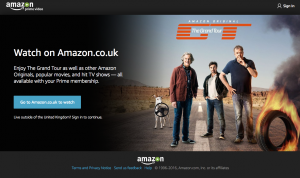 Amazon has taken on Netflix with the launch of Prime Video in more than 200 countries and territories around the world.

Customers in the other new Prime Video territories – which span the globe from Ecuador to Indonesia – can sign-up at an introductory price of US$2.99 (or €2.99) per month for the first six months and US$5.99 (or €5.99) thereafter.

With the move, Amazon is undercutting its rival Netflix, which currently offers three pricing tiers starting from US$7.99 per-month for the basic package in the US, or €7.99 in Europe.

Customers can access the SVOD service through the Amazon Prime Video app on Android and iOS phones and tablets, Fire Tablets, select LG and Samsung Smart TVs or online at PrimeVideo.com, and can also download content to view offline.

Users can watch content in English, with French, Italian, Portuguese and Spanish subtitled and dubbed versions also available for many titles.

Like Netflix, following its rollout to 130 new countries earlier this year, Prime Video is now available across Europe, Africa, Asia, Australia, North and South America. China too is Amazon’s one notable omission from its expansion drive.

“We are excited to announce that starting today, fans around the world have access to Prime Video,” said Tim Leslie, vice-president, international, Prime Video.

Citing a number of Amazon Original shows, Leslie added: “What’s really exciting is that we are just getting started.”

The launch comes on the back of Amazon’s recent release of Jeremy Clarkson-fronted car show The Grand Tour. The show, which Netflix’s content boss Ted Sarandos has previously claimed cost US$250 million for three seasons, was described by Amazon as “the biggest show premiere ever on Prime Video”.

Other Amazon originals available on Prime Video include The Man in the High Castle, Transparent, Mozart in the Jungle and Tumble Leaf.

Amazon initially went head-to-head with Netflix in the US in April by launching Prime Video as a standalone, pay-monthly service for the first time there. Previously it was only available for a flat annual rate as part of Amazon’s wider Amazon Prime offering, which also includes ebook access, music streaming and free two-day shipping of physical goods.

In the UK, a monthly subscription option for Prime Video, priced at £5.99 per-month, has been available since Amazon launched Prime Video there in 2014, as this continued over from the LoveFilm Instant package. Amazon acquired DVD-by-mail and streaming company LoveFilm for a reported £200 million in 2011.

Commenting on today’s Prime Video expansion, Digital TV Research principal analyst, Simon Murray said: “Amazon Prime Video is cheaper than Netflix, but it has the disadvantage of starting 11 months after Netflix rolled out to 130 countries.

“Although Amazon Prime Video will make a major impact to the global SVOD sector, we feel that this will be fairly limited outside North America, Western Europe and Australasia. However, this could well change as Amazon rolls out its Prime platform to new countries.”