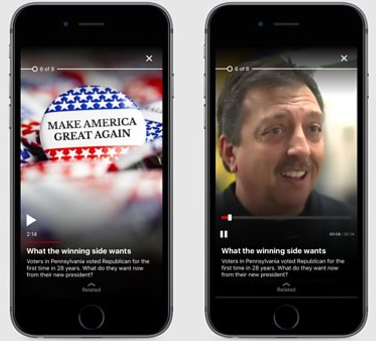 The BBC has updated its popular news app, introducing new elements including vertical videos and allowing users to swipe through the day’s new stories.

The UK pubcaster said that 60% of BBC News’ digital traffic comes from mobile, with 7am and 10pm the peak viewing times. The app has 7.6 million unique users each month.

The latest update, which will be rolled out within weeks, is part of an ongoing BBC initiative called Project Newstream to optimise the Corporation’s video news output to mobile.

“Video remains the best way we tell our broadcast journalism, but the storytelling needs to be available to the smartphone generation too,” said James Montgomery, digital development director for BBC News said.

The BBC has launched ‘portrait-format’ videos specifically for the BBC News mobile apps for Android and iOS devices.

The new format is designed to enable users to swipe through a curated list of ‘videos of the day’ and to watch full-screen video created exclusively for mobile phones.

“We have been testing this vertical video service with ‘beta’ audiences for a few months, but with today’s app update roll out we expect to learn even more about what our smartphone audience is looking for,” said James Metcalfe, executive product manager, BBC News apps and connected TV, in a blog posting.

Metcalfe said that weekly video views increased by more than 200% when the BBC launched its new news app last year, when compared to the old version in the previous year. He said that users now watch 48% of all of the video published by BBC News online and a quarter of those who watch video are watching more than five clips per week.

“Despite the increase in video views we know, through audience feedback, there were several reasons people were not watching our video on mobiles: Most of our video has traditionally required sound, which can be a problem when viewing in public and much of the video was embedded in small screens making it hard to watch without rotating the phone. In addition, much of our video offer has so far consisted of longer TV pieces that aren’t ideal if you’re after a quick update and short of time,” he said.

“Our new vertical video addresses all those issues. It will be shorter than films used elsewhere on the BBC and tell news stories in a succinct and snappy way. In addition, all of our vertical videos are subtitled and can be used without the sound on.”

In related news the BBC has added a new seasonal element to its CBeebies Playtime Island app for pre-schoolers. An online advent calendar will offerusers a daily new mini-game, themed around shows on the CBeebies TV channel, in the run-up to Christmas.

Kay Benbow, Controller of CBeebies, said: “Our advent calendar will give little users a gift every day in the build up to the Christmas, spreading some Christmas cheer with their favourite CBeebies friends.”