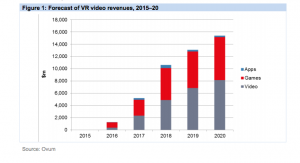 Virtual reality (VR) video will generate revenues of US$8.2 billion (€7.5 billion) by 2020 and will make more money than VR videogames by 2019, according to new research by Ovum.

The study claims that video will be the number one revenue category within VR in 2019 as millions of consumers get portable mobile headsets and spend modest sums on content.

The four main business models for VR video are predicted to be: subscription models; transactional payments for one-off downloads or streams; purchasing physical media, which will have some traction due to internet bandwidth constraints; and advertising revenues.

Meanwhile, almost 150 million headsets are forecast to be in consumers’ hands by the end of 2017 as demand for VR grows.

“While the early focus – especially for expensive dedicated home VR headset owners – will be on games and interactive experiences, these are expensive to produce and target a niche audience,” according to Ovum.

“In contrast, video can be recorded and streamed near-live and everyone with any type of VR headset will watch some video.”

The research firm predicts a “massive surge” in user-created 360º videos as cameras able to capture this footage are now available at consumer-friendly prices of US$200 to US$400.

“Expect owners of new VR headsets to embrace 360-degree videos as they have done selfies, drone photography, and Instagram,” said the report.