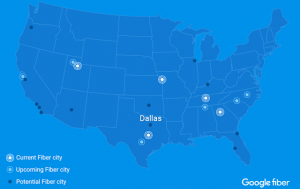 Google will not now roll out fibre internet in most of its ‘potential Fiber cities’ and will cut staff in these markets, in a major change to its connectivity strategy.

In a blog post announcing its decision, Google said that work would continue in its existing Google Fiber footprint – in the cities where it has launched or its fibre rollout is under construction.

However, in most of the cities where Google has been holding exploratory discussions “we’re going to pause our operations and offices while we refine our approaches,” said Craig Barrett, senior vice-president of Google parent company Alphabet and CEO of the firm’s Access division.

“In this handful of cities that are still in an exploratory stage, and in certain related areas of our supporting operations, we’ll be reducing our employee base,” he said, without going into specifics.

Barrett said that Google will now focus on “new technology and deployment methods” that will make superfast internet “more abundant than it is today”. At the same time he announced that he is stepping down.

“Now, just as any competitive business must, we have to continue not only to grow, but also stay ahead of the curve — pushing the boundaries of technology, business, and policy — to remain a leader in delivering superfast internet,” said Barrett.

“We have refined our plan going forward to achieve these objectives. It entails us making changes to focus our business and product strategy.”

The announcement comes as Google appears to be looking more at wireless connectivity.

Webpass manages its own network and is able to quickly connect new buildings and uses point-to-point, over-the-air signal transmission technology – something that Google previously said it was “particularly excited about”.

Google kicked off its Fiber initiative five years ago in Kansas City and in January 2015 announced plans to launch Google Fiber in 18 more US cities across four new metro areas – Atlanta, Charlotte, Nashville and Raleigh-Durham.