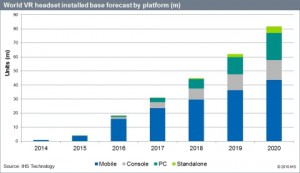 The installed base of virtual reality headsets will climb from four million in 2015 to 81 million in 2020, according to IHS Markit.

The research firm said that promotions by phone makers and the launch of smartphone solutions like Google’s just-unveiled Daydream View VR headset, will help drive uptake.

“Smartphone VR headsets’ share of the VR installed base will be 87% at the end of 2016,” predicted Ian Fogg, senior director at IHS Technology.

IHS said that Samsung’s Gear VR will have the largest installed base out of all the major branded headsets this year at 5.4 million, but predicted Daydream View will become the most popular headset for VR by 2019 due to industry support and “a compelling US$79 [€71] price point”.

Sony’s PlayStation VR will outsell Oculus Rift and HTC Vive combined in 2016, but will also be “supply-constrained” as the company plays it safe on stock inventory, according to the research.

“Sony is well positioned to build an early lead in the high-end VR headset race because of its large addressable market of 53 million PS4s by the end of 2016, its lower total cost of ownership compared to the PC VR companies and its ability to get big franchises into VR,” said Piers Harding-Rolls, director of games analysis at IHS Technology.

In terms of consumer spending on VR headsets, the research predicts that this will come in at US$1.6 billion in 2016, “bolstered heavily” by the launch of high-end headsets from Oculus, HTC and Sony.

Consumer spending on VR entertainment is forecast to grow from US$310 million in 2016 to US$3.3 billion in 2020 – however this will still represent less than 1% of overall entertainment spend worldwide.

“There is certainly more to be done in terms of premium content for VR platforms and it will take time to deliver on the potential of the technology,” said Harding-Rolls.