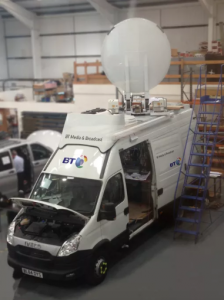 BT is to unveil the latest UHD outside broadcasting links truck at this year’s IBC conference in Amsterdam.

The vehicle will be used by BT’s Media and Broadcast division to broadcast BT Sport’s live coverage of the round two Aviva Premiership Rugby Matches in 4K.

The TES52 truck, which was designed and built by systems integrator Megahertz, is the first vehicle in the UK capable of transmitting multiple HD and UHD/4K visions via fibre and satellite simultaneously, according to BT Media and Broadcast. The truck will use the latest encoding equipment, which has been specifically designed for premium live sports broadcasting, according to the company.

BT’s digital and media broadcast services arm will display the TES52 truck on its stand in the outside exhibition area.

The showcase will also host panel speaker sessions which will include experts from Adstream, the BBC, Ericsson, Eurovision, Megahertz and Nevion. The sessions will cover The Next Generation of Networking, 4K HDR and Beyond, Designing a Broadcast Truck for the Future and Cyber Security.

BT Media & Broadcast recently completed work upgrading 20 leading football stadiums around the UK with a fibre network that can support multiple camera feeds simultaneously. The upgrade means that 40Gbps of fibre capacity will run directly from each Premier League football ground to the BT Tower. The fibre cabinets which are part of the new network will also be on display at BT’s IBC stand.

BT recently signed a deal with the BBC to provide the broadcaster with global IP network services for at least seven years. Under the agreement, BT is delivering a fibre network designed to give the BBC network capacity to support its needs.

BT will exhibit at IBC on stand O.C01