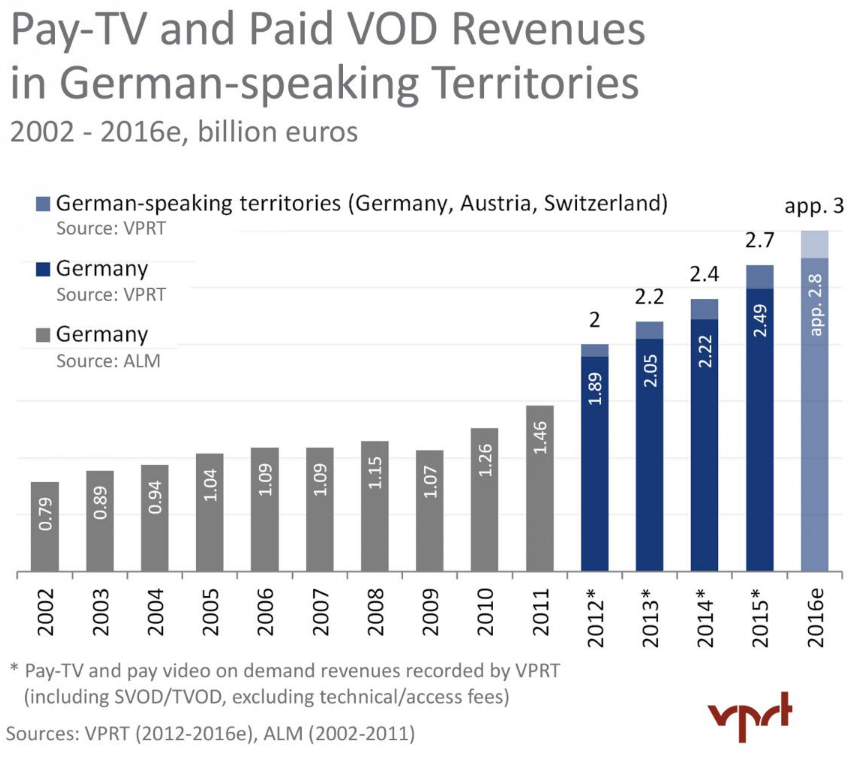 Pay TV and paid video-on-demand revenues in Europe’s German-speaking countries is forecast to pass the €3 billion threshold this year, according to German commercial broadcasters’ association the VPRT.

According to the organisation, pay TV and paid VoD revenues grew by 12% in Germany last year to reach €2.5 billion, while revenues across Germany, Austria and Switzerland grew to €2.7 billion. The VPRT predicts that revenues will grow by between 8% and 11% this year to reach €2.8 billion in Germany and €3 billion across the German-speaking countries.

According to the organisation, pay TV and VoD revenues have increased by 30% since 2012.

The average monthly reach for pay TV programmes in Germany reached 11.73 million per month in 2015, rising to 12.42 million for the first six months of this year.

“Pay TV and paid video-on-demand achieved new record figures in German-speaking territories during last year and are set for further growth in 2016. The key driver behind this development is a rich variety of programmes and services, be it documentaries, children´s programmes, music, sport or entertainment,” said Frank Giersberg, member of the board of directors, market and business development, VPRT.

“The data presented today by VPRT prove that an increasing number of viewers are prepared to pay for the quality programmes offered by pay TV channels. Sky will continue to encourage this trend by consistently enhancing our offering. By investing in original series productions, technological innovations, such as the introduction of Ultra HD, and in expansion of our channel portfolio – for instance with today´s launch of Sky Arts HD – we are making Sky even more attractive for existing and potential customers. Anyone looking for high-quality, diversified entertainment can´t escape pay TV and Sky,” said Carsten Schmidt, CEO, Sky Deutschland.