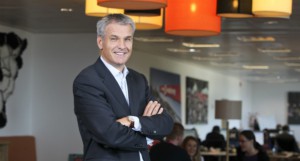 Vodafone and Liberty Global have said they intend to appoint Vodafone UK CEO, Jeroen Hoencamp, as the chief executive of their 50-50 joint venture in the Netherlands.

Under the plans, which were announced today, Ziggo chief finance officer, Ritchy Drost, will become CFO of the merged entity – which will combine Liberty-owned Ziggo’s fibre broadband network with Vodafone’s Dutch mobile operations.

Ziggo’s CEO, Baptiest Coopmans, is due to remain in place until completion of the deal, following which he will join the supervisory board of the joint venture as one of Liberty Global’s appointed directors.

Vodafone Netherlands CFO, Carmen Velthuis, will remain in her role until the merger is completed, after which Vodafone will announce her subsequent assignment.

“We are delighted they will be shaping our companies’ shared mission to create a strong and competitive integrated communications provider serving consumers, businesses and public sector customers in the Dutch market.”

Vodafone and Liberty Global agreed to merge their Dutch operations in February, claiming the deal they will create a unified communications provider in the Netherlands with complementary strengths across video, broadband, mobile and B2B services.

The deal is expected to close around the end of 2016.