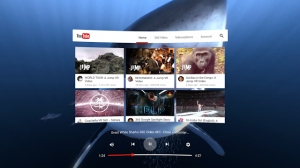 Google is due to launch a dedicated YouTube VR app later this year for its forthcoming mobile virtual reality platform, Daydream.

Announcing the launch at its I/O developer conference in Mountain View, California, Google said it is creating the YouTube VR app to provide an “easier, more immersive way to find and experience virtual reality content on YouTube”.

YouTube is collaborating with partners like the NBA, BuzzFeed and Tastemade to “explore new ways of storytelling in virtual environments”, according to Kurt Wilms, senior product manager, YouTube Virtual Reality.

It is also working with camera partners such as GoPro to help make the production of VR video more accessible to content creators.

GoPro Odyssey cameras are compatible with Google’s VR Jump camera rig – which consists of 16 camera modules in a circular array – and YouTube plans to roll out its Jump programme to all its YouTube Space creator studios around the world, starting this week in LA and New York.

Speaking at Google I/O this week, Google’s vice-president of virtual reality, Clay Bavor, said: “We’ve rebuilt YouTube from the ground up for VR. In it is voice search, discovery, your favourite playlists – all in VR.

“We’ve added spatial audio, improved VR video streaming so you’ll be able to step inside the world’s largest collection of VR videos and experience places and concerts and events like you’re actually there. And by the way, you’ll also be able to watch every single standard video currently on YouTube, but in a very different way.”

Discussing Google’s other VR app developments, Bavor said that Google Play Movies is coming to Daydream, with high definition DRM video support. “That means you’ll be able to watch movies and TV shows from Play, but in a virtual movie theatre.”

He said that Google Street View is coming to Daydream, “so you’ll be able to walk the streets of the world without having to fly around the world.”

Bavor also revealed that Google Photos will support VR, “so you can step inside and re-live favourite moments.”

The launch of the YouTube VR app follows a number of developments in this area in the last year, with the rollout of new video and audio formats on YouTube like 360-degree video, VR video and Spatial Audio.