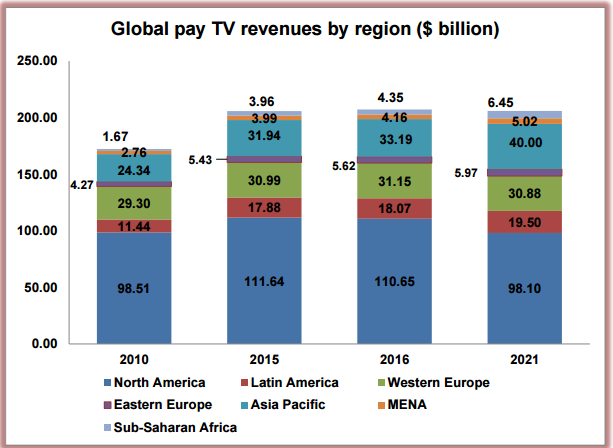 The new report claims that greater competition and conversion to bundles – with lower revenues for TV than standalone offers – will be responsible for most of this loss. Cord cutting will also play a role.

However, outside of North America, pay TV revenues will climb by US$13.6 billion between 2015 and 2021 to US$107.82 billion, with North America’s share of the global total due to fall in the coming years.

“Most of the rest of the world will not follow the North American experience. True, pay TV revenues will fall in 27 countries between 2015 and 2021, but not to the same extent as in Canada and the US. Most countries are nowhere near the market maturity achieved in North America,” said Digital TV Research principal analyst, Simon Murray.

Asia Pacific revenues are tipped to grow by US$8 billion between 2015 and 2021 to US$40 billion and will be larger than the whole of Europe by 2019, having already overtaken Western Europe in 2014.

Latin America will add a further US$1.6 billion in pay TV revenues between 2015 and 2021, according to the research.