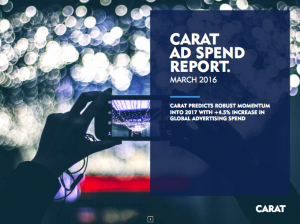 TV will continue to take the biggest share of the global ad market in 2016, with spend expected to grow by 3.1% this year driven by the Olympic Games and US elections, according to new research.

In its Ad Spend Report, media agency Carat said that while digital is “constantly closing the gap”, TV continues to “command the majority of market share” and will account for an estimated 41.4% of total global advertising spend this year.

This compares to a 27.0% estimated share for digital ad spend, although this sector is expanding far more rapidly and “continues to be the star performer for growth”, according to Carat.

“TV advertising spend is forecast to grow moderately by 3.1% in 2016 supported by major media events including the US presidential elections, the UEFA Euro 2016 football championship and the Rio 2016 Olympics and Paralympics. Growth in TV advertising spend is estimated to continue at a moderated pace of 2.9% in 2017,” said the report.

“We leverage social to boost linear TV ratings and amplify user-generated content. With this mindset we combine TV and rich consumer data to buy against people, not schedules.”

Overall global ad spend is expected to grow by US$23 billion in 2016 to reach US$538 billion – a 4.5% year-on-year increase, according to the research.

Commenting on the findings of the report, Jerry Buhlmann, CEO of digital marketing and communications company Dentsu Aegis said: “the strength of digital continues to be the dominant element in the growth of the global advertising expenditure whilst TV spend remains as the foundations of our industry.”