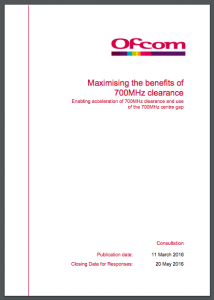 Ofcom has set out plans to clear the 700 MHz spectrum band that is currently used for digital terrestrial television (DTT) by no later than the second quarter of 2020.

The UK broadcast regulator said in a document titled ‘maximising the benefits of 700MHz clearance’ that clearing the band as soon as possible for mobile use would benefit the public. Ofcom also said that 25 MHz of spectrum in the middle of the band would be allocated away from DTT, and it brought forward plans to move the main DTT services into the multiplex currently used by digital channels like BBC4 HD and CBeebies HD.

“In November 2014 we decided to make valuable spectrum in the 700MHz band available for mobile data as soon as practicably possible. Initial plans indicated that it would be possible to make the band available by the end of 2021. However, our analysis suggests that benefits to citizens and consumers would be greater if it was available sooner,” said Ofcom.

In the document, Ofcom proposed using the previously unallocated ‘centre gap’ of spectrum in the middle of the 700 MHz band for mobile data use.

Ofcom had considered five options for this 25 MHz centre gap – DTT; audio PMSE for the likes of wireless microphones; emergency services communications networks; machine to machine communications; and mobile data – but said that its provisional view was that the first four “would not support optimal use of spectrum”.

“We consider that after change of use of the 700MHz band DTT will have access to sufficient spectrum between 470 and 694MHz to continue delivering its important benefits. Moreover, there is a risk that use of DTT in the centre gap could cause harmful interference to mobile data services in the 700MHz paired spectrum.”

“Initial plans for the 700MHz clearance programme assumed that the interim multiplexes would remain in the 600MHz band until the minimum term of their licence expires at the end of 2018,” said Ofcom. “We propose to move the interim multiplexes to alternative frequencies from the end of 2017 onwards. This would enable us to start changing the main national DTT services’ frequencies earlier than originally planned.”

The regulator said that it considers the loss of the interim multiplexes as “manageable” for the DTT platform as they only account for 0.5% of DTT viewing.

Ofcom said that in the medium term there is a “number of options” for responding to the loss of capacity on the interim multiplexes, including upgrading some or all of the DVB-T multiplexes to DVB-T2 or offering additional channels – including HD services – through a broadband connection, using a hybrid of DTT and IPTV.

In a separate document published Friday about the ‘management of transitional coverage issues’ for 700 MHz, Ofcom said that clearance of the spectrum should not require viewers to replace their set top boxes or televisions, bus said that “given the extensive nature of the infrastructure changes, it would not be possible to completely avoid disruption to consumers’ television services as a result of clearance.”

“We aim to ensure that clearance does not cause significant disruption to viewers,” said Ofcom.

Overall, Ofcom said that when the 700MHz band becomes available for mobile data, it will be divided into: a 9 MHz ‘guard band’ to protect DTT from interference; 30MHz of uplink, which mobile devices will use to communicate with base stations; the 25MHz ‘centre gap’ in between the uplink and the downlink; 30 MHz of downlink which base stations will use to communicate with mobile devices; and 3MHz ‘guard band’ between 700MHz and 800MHz band.