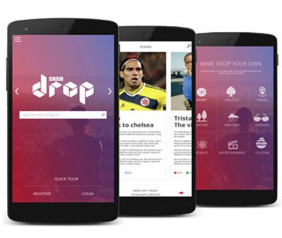 The BBC has launched a new responsive news website designed to present content on mobile devices, available via its BBC Taster site.

BBC Drop, designed by Kenya-based startup Ongair in partnership with the BBC, emerged from a hackathon event organised by the BBC World Service and the BBC’s digital Connected Studio unit.

The BBC invited teams of African technology experts to think about ways to reach young Africans through social and digital media. The result, BBC Drop, asks the user for a few favourite topics, or social media preferences, and then continues to learn what they like and dislike from what they swipe on screen. There is also the option of a more personal news feed which incorporates the user’s own social feeds.

The BBC said it had successfully tested the site in a number of African countries. BBC Drop has been designed with the Android platform in mind, although it also works on other platform, according to the BBC.

The service is the latest African initiative from the BBC, following on the heels of BBC Minute CatchUp, a news catch-up service designed by a South African team that has been viewed 290,000 times since a pilot was launched in November.

“This latest innovation highlights the BBC’s strong commitment to serving young digital audiences in Africa – both editorially and technically. Digital revolution in Africa offers media companies great opportunities to grow the reach of their journalism and I am very happy that an African tech start-up is playing a key role in it,” said Dmitry Shishkin, digital development editor for BBC World Service.