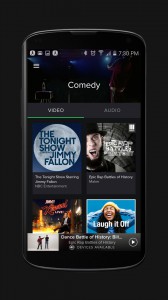 Music streaming service Spotify has begun rolling out video content in partnership with major media brands like the BBC and Vice Media.

As of this week, Shows on Spotify is being introduced on the music service’s Android app, with an iOS launch to follow next week.

The programming will initially go live in the US, UK, Germany and Sweden with more countries to follow.

At launch, content will be available from partners such as ESPN, Comedy Central, the BBC, Vice Media and Maker Studios – with more to be added over time.

Spotify first announced its video plans last May, positioning itself as a wider entertainment proposition, offering clips and full episodes of television programming that will sit alongside the core music streaming service.

It also said that the video output will include an original content strand from the company itself, called Spotify Originals.