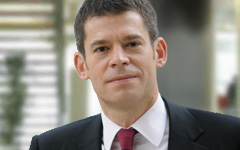 The CEO of BT Openreach, Joe Garner, has announced he is stepping down to become chief executive of building society Nationwide.

Garner, who became CEO of BT’s local access network division in February 2014, is expected to take up his new post next spring after handing over to his successor – who BT said “will be named in due course.”

Garner said that it was an “extremely hard decision” to make, but “the opportunity to become CEO of one of Britain’s most important financial institutions and service champions just proved too good to turn down.”

The news comes as companies including Sky, TalkTalk and Vodafone UK urge broadcast regulator Ofcom to reform the UK broadband market, as part of its major review the UK communications market.

One of the topics under consideration is whether BT’s Openreach division, responsible for maintaining the national broadband network, should be split from BT’s other businesses – something that Sky called for in its final submission to Ofcom last month, as part of the strategic review.

In a statement explaining its stance, Sky argued that as BT has sole control over Openreach its decisions about investment in national infrastructure “reflect the interests of BT rather than the whole industry and the businesses and consumers that use its service”.

However, in its submission, BT issued a strong defence of Openreach’s continued operation as part of the BT Group and highlighted what it said are continuing problems in the pay TV market as a result of Sky’s dominance.

In a statement today, outgoing Garner said: “In my view, it is BT’s investment that has helped the UK to become one of the strongest digital economies in the world and I am proud to have contributed.

“Openreach is now poised to take the UK from a superfast to an ultrafast nation and I am confident it can achieve this as part of the BT family. I wish my successor at Openreach and everyone there and at BT all the best for the future.”