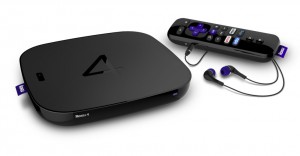 Roku CEO Anthony Wood described the Roku 4 as “our best streaming player ever” with the device offering a quad-core processor, support for up to 60 fps 4K streaming, and a 1080p home screen and user interface.

The new box will offer a channel line-up that includes 300,000 movies and TV episodes as well as an exclusive curated 4K Spotlight channel that offers instant access to 4K content. A 4K UHD category within the Roku Channel Store is also designed to make it easier to easily find streaming channels with 4K entertainment.

“Powered by the new Roku OS 7, the Roku 4 gives consumers a new era of streaming performance and control over their entertainment,” said Wood.

The new Roku operating system, which was also announced today, includes an update to the Roku Feed that lets users follow movies, TV shows, actors and directors so that they receive automatic entertainment updates about pricing and availability.

The update extends the functionality of Roku Feed, which first launched in March as a way for viewers to ‘follow’ box office movies so that they are notified when titles becomes available for streaming.

Roku is also releasing a major update to the free Roku Mobile App for iOS and Android. The company said the update will make it easier for consumers to access key features including Roku Search, Roku Feed, Remote Control and Play on Roku.

Using the app, Roku users can also cast photos from their mobile device and create new screen savers that play when the Roku 4 is idle.
Elsewhere, a ‘Remote Finder’ feature that lets users locate their remote control by pressing a button, is another new feature that is included in the Roku 4.

“We designed the Roku 4 for entertainment-loving streamers, with an emphasis on superior streaming performance and brilliant picture quality for both 4K Ultra HD (UHD) and regular HD TVs,” said Wood.

Roku 4 boxes are available to pre-order now in the US priced at US$129.99 and will be available in shops there later this month.

Roku OS 7 will also be rolled out to current-generation Roku players and Roku TVs in the US, Canada and UK through a software update beginning in mid-October. This expected to be completed in November.