Global internet speeds up 17% in a year 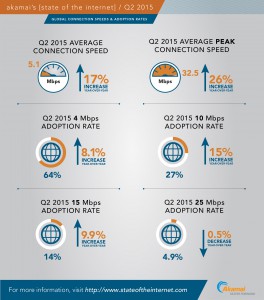 On a global basis the average internet connection speed increased by 17% year-on-year in the second quarter, according to Akamai’s latest State of the Internet report.

Content delivery network (CDN) provider Akamai said that the average global connection speed was 5.1Mbps in Q2, up 3.5% quarter-over-quarter, while the average speeds among the top 10 countries and regions all remained “well above 10 Mbps.”

Global peak connection speeds increased to 32.5 Mbps on average, and increased in every top 10 country/region except Sweden, which remained unchanged from the first quarter at 62.8 Mbps, according to the study.

Eight of the top 10 saw average peak speeds greater than 70 Mbps, while Singapore was the only country that saw a double-digit quarterly gain – a 12% increase to 108.3 Mbps.

Other countries that ranked among the top 10 were Romania with speeds of 72.1 Mbps and Macao with an average of 62.6 Mbps.

“We continued to see healthy increases in key connection speed metrics, particularly on a year-over-year basis. The improvement in connection speeds is vital as more content, not the least of which is video at increasingly higher levels of quality, is being delivered over the internet,” said David Belson, editor of the Akami report.

Globally, 110 out of 144 qualifying countries/regions saw average connection speeds increase from the previous quarter, with growth rates ranging from a modest 0.4% in Senegal (1.5 Mbps) to a substantial 67% inTunisia (2.8 Mbps), according to the report.

The study is based on data gathered from the Akamai Intelligent Platform.