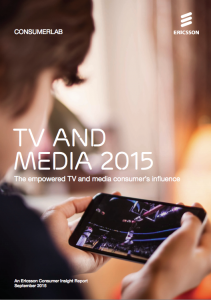 Some 35% of all TV and video viewing is now watched on-demand with over half of consumers claiming to watch streamed on-demand content at least once a day, according to new research.

While linear TV remains high, Ericsson said that linear viewing is linked to age, with 82% of 60–69 year olds claiming to watch linear TV on a daily basis compared to just 60% of millennials aged 16–34.

“This is a clear indication that linear TV will have to continue to reinvent itself in order to remain relevant to the younger population,” said the report.

Nearly two thirds of teenagers’ total TV and video viewing time is now spent on a mobile device such as a smartphone, tablet, or laptop, according to the research.

Across all age groups, 61% of consumers watch video on their smartphones, an increase of 71% since 2012, with the average time spent watching video on mobile devices up 3 hours a week compared to three years ago.

Close to one in 10 consumers also claimed to watch YouTube for more than three hours per day. In the US alone, 41% of people used YouTube at least daily and 71% at least weekly, while 27% of US consumers watch Netflix daily and 52% do weekly.

“The continued rise of streamed video on demand and UGC services reflects the importance of three specific factors to today’s viewers: great content, flexibility, and a high-quality overall experience. Innovative business models that support these three areas are now crucial to creating TV and video offerings that are both relevant and attractive,” said Anders Erlandsson, senior advisor, Ericsson ConsumerLab.

Among viewers that subscribe to SVoD services like Netflix, Amazon Prime and HBO Now, 87% said they binge-view at least once a week. : Half of linear TV viewers said they can’t find anything to watch on a daily basis.

The report interviewed consumers aged 16-59 and 60-69 across 20 markets, including countries like France, Germany, Spain, the UK, Turkey, Russia, the US, China, Brazil and Mexico.