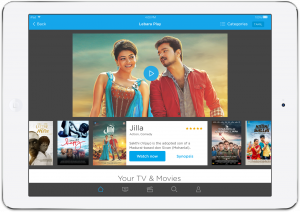 Migrant community-focused OTT service, Lebara Play, is now available in 39 European countries and has added Hindi, Bengali and Punjabi content to the service.

The video service has added both live TV and on-demand movies in these languages, having signed deals with Asian networks including: Star Plus; Viacom18 Network-owned Colors; Zee TV; and Indian movie channel Sony MAX.

“Thanks to the relationships we’ve built with the world’s leading specialist content providers, we’re able to give customers access to all their favourite channels and movies in one place,” said Lebara Play CEO, Aditya Thakur.

“Existing providers take a ‘one size fits all’ approach for ethnic viewers, whereas we have an in-depth understanding of our audiences’ needs and provide niche but deep content, with no commitment or upsell.”

Lebara Play first launched in June with Tamil, Turkish, French West African and English West African content. The service was initially available in the UK, France, Germany and The Netherlands, with the rest of Europe added over the summer and other territories worldwide to follow by the year-end.

Lebara Play offers more than 150 TV channels and over 3,000 movie titles for streaming on mobile, computer and tablet.