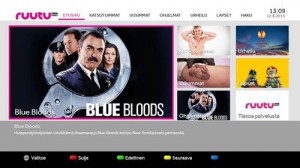 The service has been available in beta mode on the platform since June, offering catch-up TV and other content. The service now also offers a restart TV service, allowing viewers to restart programmes that have already begun airing on linear TV.

The service is HbbTV 1.5 and MPEG DASH-based, uses the Sofia Digital Backstage HbbTV platform, and can be accessed via the red button from Nelonen Media’s four free-to-air channels – Nelonen, Jim, Liv and Hero. The content is identical to that available on the web and mobile platfomrs, without the need for a paid subscription. In addition to catch-up and restart, viewers can access the full Ruutu TV portal. The Ruutu service menu on screen gives access to the Finnish EPG which shows all Finnish free-to-air channels.

MPEG DASH is the key new element of the HbbTV 1.5 specification, and has been adopted as part of the NorDig Unified 2.5 spec to be adopted across the Nordic market and in some territories beyond. In Finland, receiver specifications and the associated test regime will be added to the existing FiCom Antenna Ready certification programme.

“You can restart a current programme by pressing one button on the remote control when you have the Ruutu application in a smart television and you can access other free-of-charge online content in the Ruutu service. For a viewer, this means an extensive increase in content supply and the opportunity to watch a favourite programme at a suitable time on television. In addition, there is a new functionality that will allow the viewer to restart a programme and watch other episodes of the same series,” said Kai Taka-Aho, SVP, online at Nelonen Media.