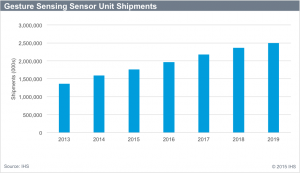 Shipments of gesture-sensing control interfaces, on devices including smart TVs, are set to grow 10% year-on-year to reach 1.8 billion units in 2015, according to IHS.

The research firm claims that the shipments will rise as emerging virtual reality games, smartwatches, smart TVs and other consumer electronics and IT applications enter the market.

Optical-based 3D depth sensing technologies will account for 66% of sensor unit shipments for games console applications in 2015, according to IHS.

The research claims that Apple TV will also likely adopt the structured light technology Apple acquired from PrimeSense, which would lead to 35% year-on-year growth in gesture sensing control for smart TV applications.

He claims that gesture controls will be complementary to touch screens as each technology is appropriate for specific applications: “Smart TVs, for example, are not good candidates for touch screens, because they are too far from viewers. On the other hand, gesture sensing control is especially suitable for future immersive augmented reality and virtual reality computing.”