Amazon takes on Chromecast with ‘fling’ for Fire TV 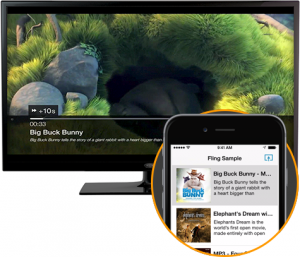 Amazon has launched a toolkit that will allow developers to add ‘fling’ capabilities to their mobile apps, letting users to click to make media content on Amazon Fire TV devices.

The Amazon Fling SDK will allow video, audio and images to be sent from iOS, Android or Fire OS mobile apps to Amazon Fire TV,

Amazon described the SDK as a new way for developers to get their apps on Amazon Fire TV, in a move that sees the e-retail giant take on Google, which offers similar ‘casting’ functionality through its Chromecast TV dongle.

“When customers are using your app on the iOS, Android or Fire device, they’ll see the Amazon Fling icon appear in your app. They can touch the icon and then send your content to their Amazon Fire TV,” said Amazon.

“You don’t need to explain how to fling your content. The entire experience happens within the app, making it intuitive for your customers. Customers can start the experience from mobile and then later control the playback with both your app and their Amazon Fire TV remote – whichever is most convenient.”

The SDK is already being used by singing app Karaoke Party, to display song lyrics and videos on Amazon Fire TV and to send audio from the microphone on the customer’s device to the TV. Digital news broadcaster Rivet Radio is also using it to lets listeners tune-in on the TV.