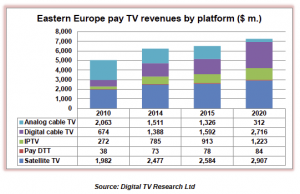 Pay TV revenues from eastern Europe will grow by 17% between now and 2020, a significant slowing down of growth relative the first half of the decade, according to Digital TV Research’s latest report.

According to the Digital TV Eastern Europe Forecasts report, pay TV revenues from the region will reach US$7.269 billion by 2020, up US$1 billion on the 2014 figure. Overall, pay TV growth between 2010-20 will have been about 45%, according to the report.

Russia will contribute US$2.29 billion, or 31% of the total, to pay TV revenues in 2020 – overtaking Poland as the market leader this year. Russia will be responsible for nearly two-thirds of the region’s US$1 billion additional pay TV revenues between 2014 and 2020, according to the report.

Satellite TV revenues, which still account for the lion’s share of revenues, will only grow by 17% over the same period, according to Digital TV Research.