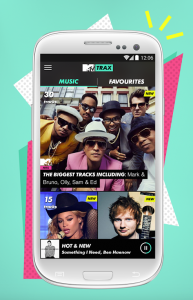 MTV Play is a VoD service featuring many of MTV’s most popular shows, while MTV Trax is a music streaming app designed for casual music consumers that may be “put off by more expensive ‘all you can eat’ services.”

MTV said that both services will be available for a small monthly fee, however some MTV viewers will be able to get free access to the services through partnerships with mobile operators.

Consumers with MTV Mobile branded tariffs will get free access to MTV Play, while other consumers in those countries will be able to access the same content for €2.99 per month or €29.99 per annum.

MTV is launching MTV Trax as a direct-to-consumer subscription service in the UK on March 3, through the App Store, Google Play or Windows Phone Store, following a successful trial. It is also due to launch in New Zealand, again in partnership with an unnammed network operator.

“MTV is one of the hottest entertainment brands in the minds of 16 to 24-year-old mobile users, with the majority of online engagement with the MTV brand now coming through mobile devices,” said Bob Bakish, ‎president and CEO of MTV parent firm, Viacom International Media Networks (VIMN).

MTV Play service was developed in partnership with multi-screen platform developer Vigour, and lets viewers ‘flick’ content from their smartphone to other connected screens, such as a tablet or smart TV.

MTV Trax is powered by the MusicQubed platform, and offers an MTV-curated selection of 100 of the “hottest music tracks”, which users can access offline.