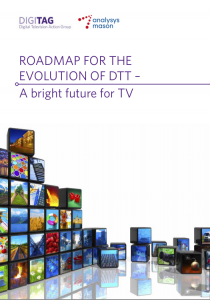 DTT will remain the pre-eminent TV viewing platform in Europe “for the foreseeable future,” despite radio-frequency spectrum pressures, according to a new report.

The ‘Roadmap for the evolution of DTT’ study, co-authored by Digital TV standards body DigiTAG and Analysys Mason, said that the re-allocation of the 700 MHz band will reduce the total spectrum available for DTT by an average of 30%.

“To remain competitive and sustain the adoption of new technologies, the DTT platform will require continued access to sufficient spectrum especially during migration periods,” said the report.

The study called for clear spectrum allocation to provide security and stability, promote innovation, and assure long-term investments for industry stakeholders and viewers.

It also said that future DTT platform development will require the ongoing support of governments, industry stakeholders and viewers.

Outlining the future technology roadmap of digital terrestrial TV, DigiTAG and Analysys Mason predicted that consumer demand will spark a transition to new standards in three to 12 years.

Most countries are likely to fully adopt a profile that supports UHD, 4K TV formats alongside SD and HD, MPEG-4 and HEVC encoding and DVB-T2 transmission between 2017 and 2026, according to the study.

It said this adoption will be led by consumer demand and expectations for HD and UHD TV.

More advanced transmission and encoding standards as well as resolutions up to 8K, are predicted to take place from 2023 to 2030 and beyond.

“This means it is necessary to provide certainty to the DTT platform in terms of both spectrum access and needed investments to upgrade the platform,” said DigiTAG and Analysys Mason.