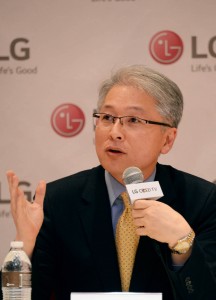 LG has outlined plans to “significantly expand” the market penetration of its OLED TVs this year, as it unveiled an extended lineup of OLED TVs at the Consumer Electronics Show in Las Vegas.

Speaking at a media roundtable at CES, the new executive vice-president and CEO of the LG Home Entertainment Company, Brian Kwon, said he is looking increase the company’s investment in OLED technology, with sister company LG Display having already pledged KRW700 billion to upgrade its manufacturing facilities to produce larger OLED panels.

He added that LG aims to improve the price competitive of its OLED TVs by using improved components and advanced manufacturing technologies and creating better synergies among LG affiliates.

“In 2014, LG focused on gaining business momentum and positioning itself for the future by actively promoting our flagship OLED TV lineup. This year, we intend to significantly expand the market penetration of LG OLED TVs which have been receiving superb reviews as the next generation TV,” said Kwon.

He claimed that LG is “determined to create further growth momentum in next-generation home entertainment business areas by providing innovative solutions and services” – including OLED TVs and Ultra HD TVs.

“At the same time, we’ll enhance the convergence strategy allowing us to move toward integrating an array of new Internet of Things solutions that will enable our customers to connect their TVs to multiple devices more seamlessly,” added Kwon.