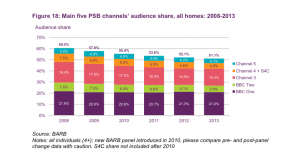 Public service broadcasting is “performing well” despite falls in both programme spend and viewing, according to an Ofcom review published today.

The UK broadcast regulator’s Public Service Content in a Connected Society report claims that the main public service broadcast (PSB) channels accounted for 51.1% of all UK TV viewing in 2013, down from 60.8% in 2008 – though with the inclusion of +1 channels, the combined viewing share of PSB channels was 58.7% last year.

Despite this, Ofcom found that overall audience satisfaction remains high. Some 77% of viewers said that they were satisfied with the PSB channels, up from 69% in 2008, while the volume of new shows during peak time viewing increased by 1.1% over the five years to 2013.

“The UK media and communications industry has undergone significant change since 2008, driven by the completion of digital switchover, the rise in online TV viewing and the rapid take-up of connected and mobile devices,” said Ofcom.

“If current trends continue, Ofcom’s view is that the PSBs should be able to maintain current levels of delivery and output. But on-going changes in the sector could present both opportunities and challenges for PSB.”

Between 2008 and 2013, Ofcom found that spend by multichannel broadcasters and other non-PSB channels on programming other than sport increased by 43% to £345 million, accounting for 15% of investment in original shows.

Noting possible future areas of change, Ofcom said that, on the one hand, a faster shift to on-demand viewing could “reduce the reach of the PSBs,” but could also help PSBs give audiences access to archive programmes.

Ofcom also warned that while competition over-the-top services like Netflix could help drive innovation and better quality programmes, they could also reduce audience share and revenues for the PSBs. It also said that audience fragmentation is potentially challenging for the PSBs.

“A generation gap is emerging between younger and older audiences, with significant differences in opinion, attitudes and habits towards PSB and television more generally. People are concerned that older or more vulnerable people might lose access to content because it is increasingly available only online,” said Ofcom.

The report, Ofcom’s third review of public service broadcasting, said that revenue to subscription video services had risen by 76% to £112m, indicating that the likes of Netflix – with an estimated three million UK subscribers – and Amazon Prime Instant Video are gaining traction.

Total UK online television revenues – from advertising, subscriptions and transactional – increased by 41% in 2013 to reach £364m, with the commercial PSBs accounting for a “significant share of this revenue.”