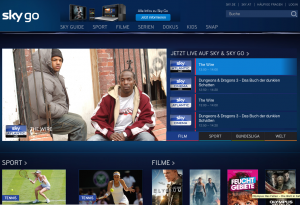 Sky Deutschland is rolling out its Sky Go multiscreen service to Android tablets and smartphones.

Starting today, Sky Go will be available on Google Nexus 5, Nexus 7 and selected Samsung Galaxy tablets and smartphones – including the Galaxy S5 and the Galaxy Note 10.1 – with more Android devices to follow.

The service is free for all Sky Deutschland customers starting from the Sky Welt or Sky Starter package.

Viewers will be able to access live sports – including the Sky Fußball Bundesliga and Sky Sport channels – from the app, as well movies and TV series.

From within the Sky Go app, customers will also have access to Sky Deutschland’s Snap programming catalogue, making it easier for subscribers of both Snap and Sky Go to find content.

“We are pleased that we are expanding the range of devices on which customers can use Sky Go. To begin with, we are making our premium content available – live and on demand – on nine of the most popular Android smartphones and tablets. We plan to bring Germany’s best online television to even more Android devices in future,” said Euan Smith, executive vice president, product and operations at Sky Deutschland.

Earlier this week, Sky Deutschland also made Sky Online and Snap available on the Microsoft Xbox One game console platform.