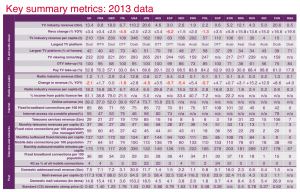 The UK leads EU countries for the use of internet-connected televisions, with almost a quarter (22%) of UK consumers saying they have a smart TV, and the vast majority of these (84%) having connected it to the internet, according to UK regulator Ofcom’s latest International Communications Market Report.

According to the report, one third (32%) of the online population in the UK use the internet to watch TV programmes or films at least once a week, the highest of any European country surveyed.

However, individuals’ TV viewing declined more in the UK last year than in any other comparator country, the Ofcom report found. The average UK resident watched three hours 52 minutes of TV per day in 2013, slightly above the average for the countries surveyed, but a fall of 3.7% or nine minutes per day since 2012. This was the greatest decline of any country, ahead of Sweden and China where viewing fell by 3.0%. However, Ofcom posited that viewing numbers for 2012 may have been boosted by the Olympic and Paralympic Games and a wet summer. It also suggested that economic recovery in 2013 may have been a factor in the fall in daily viewing, as people returned to employment or spent more disposable income outside the home.

The report found that the UK leads the EU’s five biggest economies for broadband take-up, usage and high-speed broadband coverage. Almost eight in 10 UK homes are now able to access broadband that provides connection speeds of 30Mbps or above. At the end of 2013, a quarter of UK fixed broadband connections (25%) fell into this category, a higher proportion than in France (9%), Germany (16%) and Italy (18%), but lower than in Spain (33%).

Two-fifths (40%) of advertising spending in the UK is online – more than any of the other countries analysed.