BBC to save £50 million by ‘reinventing’ BBC Three 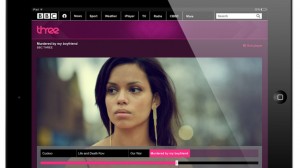 The BBC’s plan to “reinvent” youth-skewing network BBC Three as an online-only channel will generate savings of £50 million and allow the corporation to experiment with new content, the BBC has said.

Outlining its first detailed proposals for taking BBC Three online, the BBC said that with the change it will be able to develop new forms, formats, different durations, and more individualised and interactive content, based around two “editorial pillars” – ‘make me think’ and ‘make me laugh’.

The move would also mean that children’s programmes on CBBC would be extended by two hours per night, and that the BBC would be able to launch a one-hour, time-shifted linear feed of its flagship linear channel, BBC One + 1.

BBC Director-General Tony Hall described the plans as the “most exciting and ambitious proposals” since he has been at the BBC, though admitted that “with the licence fee frozen, we’ve had to make difficult decisions.”

“By searching out new ways to engage and entertain young audiences on their terms, the new BBC Three will be a great example of how we can reinvent the public service for the digital world – using their talent, appearing on the platforms and devices that they use and talking to them as equals and partners,” said Hall.

BBC Director of Television, Danny Cohen said that the BBC Three shift would drive “the whole of the BBC forward in a time of relentless digital and technological change.”

“As a former BBC Three Controller this genuinely wasn’t an easy decision but if ever there’s proof that necessity is the mother of invention, I believe it’s today’s proposal. I didn’t want to makes savings by simply salami-slicing again across the board in BBC Television – for me that wasn’t an option,” said Cohen.

“I don’t want us to sit back as a legacy company and watch as generational change bites away at our impact – I want us to be at the forefront of that change.”

Giving more detail on the proposals, Damian Kavanagh, BBC Three Proposal Lead, said that 80% of new BBC Three’s budget would be spent on long form shows like Murdered by My Boyfriend and Bad Education.

The other 20% will go towards new form digital content. This will include short form video, image-led storytelling and votes on reactive topics or blog posts from contributors, designed to offer a “richer experience” around BBC Three’s content, with the channel “freed from the restraints of the linear schedule.”

He also said that the new BBC Three could open up areas of collaboration across the BBC with the likes of Radio 1, Newsbeat and BBC sport, and claimed that online BBC Three would foster a “more open relationship” with its audience through new platforms and social media.

“BBC Three launched in 2003. That’s before the iPhone, Facebook, SBTV, Netflix, Snapchat, driverless cars and a man jumping from space.  The world’s changed and what millennials and Generation Z want and expect from the BBC has changed. To meet their needs as licence fee payers we must offer them a service and content they want,” said Kavanagh.