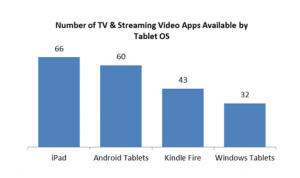 Tablet ownership among US consumers is growing at a faster rate than that of any other connected device, with video viewing helping to drive usage, according to NPD Group.

The research firm’s Connected Intelligence, Connected Home Report claims that as of Q3 2014 there were 109 million tablets in use, up 35 million compared to last year, and that these viewers are frequently doing “video-focused activities.”

Some 55% of tablet users said they use a video feature of their device, including: video calling; taking, posting, and uploading videos; and watching video from a streaming service or app from a TV channel or pay TV provider. Among 18 to 34 year-olds, this figure stood at 67%.

According to NPD, 66 of 70 TV and streaming video apps evaluated were available on tablets – with iPads having the most at 66, followed by Android tablets with 60, Kindle Fire with 43 and Windows tablets with 32.

“Consumers are demonstrating their willingness to spend time using tablets for a broad set of video features, including their vast library of TV and streaming video apps. This provides an opportunity for mobile carriers to promote features such as on-the-go video calling, TV viewing and ability to socialize videos as a reason to attach a tablet to their data plan,” said John Buffone, NPD’s executive director of Connected Intelligence.