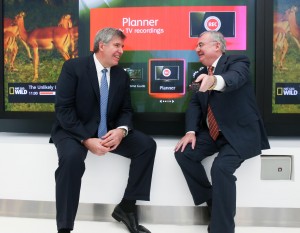 Irish telco Eircom recorded 28,000 customers for its IPTV offering eVision as of September 30, after reporting “continued traction” for the service.

Announcing its fiscal first quarter results, Eircom said that its TV service now has 25% penetration among its fibre customers.

“Our leading network capability and the addition of services such as eVision On Demand means that we offer the most compelling bundles in the market,” said the company.

Eircom launched eVision in October 2013, offering up to 100 channels in a move to establish itself as a quad-play provider and take on pay TV operators BSkyB and UPC Ireland. In February this year the firm set a June 2014 target for reaching 24,000 TV customers, which it has now exceeded.

For fiscal Q1 Eircom reported revenue of €313 million, down 3% year-on-year. However revenue in its ‘other’ segment rose by 21% year-on-year to €10 million, which Eircom said was mainly due to growth in TV income.

EBITDA of €114m was  down 6%, which Eircom attributed to planned investment in subscriber growth.