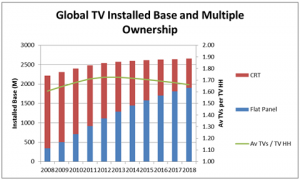 The Global TV Replacement and Ownership 2008 – 2018 report claims that roughly 23% of global flat panel TV sales in 2013 were bought as a replacement for an existing flat panel display and that this share will grow to 67% by 2018.

Strategy Analytics predicted that this would help drive a 3.8% growth in the compound annual growth rate of TV shipments over the same period.

Eric Smith, Strategy Analytics analyst for connected home devices said: “Moving forwards the TV industry will become less reliant on consumers purchasing additional sets for their homes as alternative TV viewing devices such as tablets will increasingly impact on demand for small screen TVs that would be destined for use in a bedroom or kitchen. Replacement demand for the main living room TV set will become the major driver of TV sales over the next 5 years”.