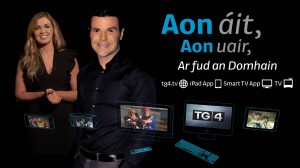 According to TG4, the move marks the completion of a three-phase digital content distribution strategy. TG4 technical director Neil Keaveney said the smart TV app is “another reflection of TG4’s agility and commitment to adapting to new technologies to deliver the channel’s quality content to the audience”.

TG4 has also released an updated and enhanced version of the TG4 Web-based Player, available through the browser on any device from the tg4.tv portal.  The upgrade makes it possible for users to create their own personal playlist and will offer a continuous live stream of TG4 content worldwide, according to the broadcaster, with any rights-restricted content in the user’s region being replaced by non-restricted TG4 content.

Finally, the broadcaster has released an updated and enhanced version of the TG4 Player app for iPad. This will be available free to download from the App store, worldwide, and will include access to the TG4 live stream as well as a catch up service for TG4 audiences.  The TG4 player App is in addition to the seven existing Irish language apps developed by TG4 for kids.

“It is important that Irish language content is accessible to audiences worldwide, and our new services ensure TG4 programmes are available around the globe.  It also ensures our home audiences can catch up or watch live any time, any place, across all major devices,” said TG4 head of output Lís Ní Dhálaigh.