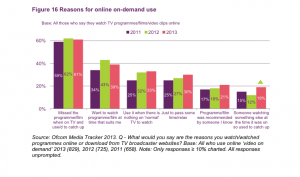 Some 39% of UK internet users said they use the web to watch TV or download programmes from broadcasters’ websites, up from 35% in 2012, according to new research by Ofcom.

The UK broadcast regulator’s new ‘UK audience attitudes to the broadcast media’ report said that since 2011, the proportion of internet users who said they used the internet to watch TV clips online, and download from websites other than the TV broadcasters’ websites, has increased from 33% to 39%.

Among the 35 to 54 age group in particular, there has been a significant increase in those who claim to watch TV clips online or download them from these websites – rising from 32% in 2012 to 40% in 2013, said Ofcom.

Among those who said they watched TV, films or video clips via the web, 57% said they did so at least several times a week, rising to 69% among 16 to 34 year-olds.

For the research, Ofcom polled a sample of 1,838 adults aged 16 and over, who answered questionnaires in April/May and October/November of last year.