Fast growth ‘over’ for the global pay TV industry 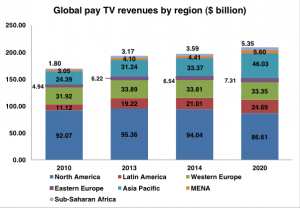 However, this will be offset by gains in Sub-Saharan Africa and the Asia Pacific. In Sub-Sahara Africa revenues are tipped to climb from US$3.17 billion to US$5.35 billion between 2013 and 2020, while in Asia Pac revenues will grow from US$31.24 billion to US$46.03 billion over the same time period.

Though America is tipped to remain the world’s largest pay TV revenue market in 2020, it will also suffer the largest revenue fall of any market of US$7.9 billion from 2013 “as homes convert to bundles and as competition forces down prices.” However, cord cutting was tipped to have a “limited impact” with pay TV penetration expected to dip only slightly from 86.4% in 2013 to 84.1% in 2020.

The biggest countries by pay TV revenue growth are expected to be India, Brazil and China with revenues tipped to climb in these countries between 2013 and 2020 by US$6.6 billion, US$2.4 billion and US$2.2 billion respectively.

“Pay TV revenues will more than double in 40 countries between 2013 and 2020. Most of the fast growing nations by percentage increase will be in Africa, with Myanmar, Laos and Bangladesh providing notable exceptions,” said the report.