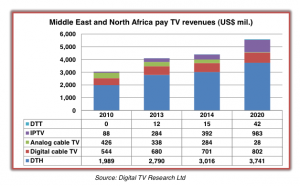 Pay TV revenues in the Middle East and North Africa are set to climb by more than 83% between 2010 and 2020, according to new stats by Digital TV Research.

The Digital TV Middle East & North Africa Forecasts report claims that total pay TV revenues in this region will climb from US$3.05 billion (€2.25 billion) in 2010 to US$5.6 billion in 2020, with satellite expected to remain the dominant TV platform.

IPTV revenue in the region is expected to see the biggest proportional increase, rising from just US$88 million in 2010 to US$983 million in 2020, while analogue cable TV revenues are tipped to fall from US$426 million to US$28 million over the same period.

In terms of country breakdown, Turkey and Israel are expected to contribute 52% of the MENA region’s pay TV revenues in 2020.

“Revenues in Israel will fall by US$56 million over this period due to greater competition.”