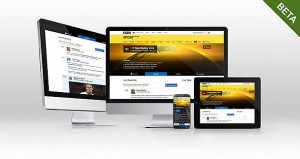 The BBC has launched an early beta version of a new service that is designed to boost its live event coverage over PC, tablet, mobile and connected TV screens.

The BBC said that the revamped digital experience was designed as a “new approach to live event coverage” following the success of its digital coverage of the 2012 London Olympics and this year’s Wimbledon tennis tournament and Glastonbury music festival.

“Starting with 2014’s major sports events – the Winter Olympics, World Cup, Wimbledon and Commonwealth Games – we have developed a new user experience that combines the best video, audio, text, social and stats, alongside the BBC’s world-class digital journalism across screens.”

The BBC said that the small beta launch was the first step towards delivering improved live coverage of a wider range of events.

The trial begins this week as part of the BBC Sports offering and will focus around live text commentary on Sportsday Live. The BBC said it will offer content that updates faster, has more consistency across devices and make it easier for users to find coverage that they are interested in.

“It will be gradually rolled out for a range of live sports events in the run up to Christmas, adding features like live and on demand media and statistics as we continue to test and iterate the product ahead of the Winter Olympics in February 2014,” said Hall.

BBC director Tony Hall first announced last month plans to make coverage of live events available with video, audio, text and statistics across TV, computers, mobiles and tablets. This was part of his wider plans for the BBC’s digital future.