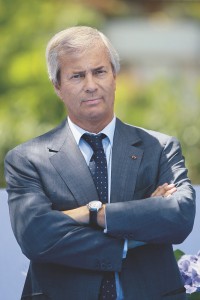 Vivendi has approved plans to spin off its teleco arm SFR as a separate company and has said that leading shareholder Vincent Bolloré will replace Jean-René Fourtou as chairman of the new-look Vivendi.

Vivendi said De Puyfontaine will join the group early 2014 as senior executive vice-president in charge of Vivendi’s media and content activities and will bring “strong international experience” as well as “know-how in digital strategy.”

Vivendi’s Supervisory Board, chaired by Jean-René Fourtou, unanimously approved the group’s planned demerger of SFR, which it launched on September 11.

“In this way, Vivendi aims to become an international media group, bringing together strong brands in the production and distribution of original content. This group would fully respond to the new ways of consuming digital media in music and video, and would pursue its development in fast-growing markets,” the firm said.

The split could see SFR shares distributed to Vivendi shareholders on the day of the transaction, giving them the opportunity to invest in two different firms that will each be listed on the stock market and valued according to their respective strengths, according to the company.

Vivendi said that until the completion of the demerger plan, the firm’s management board, chaired by Jean-François Dubos, will include SFR chairman and CEO Jean-Yves Charlier and De Puyfontaine.